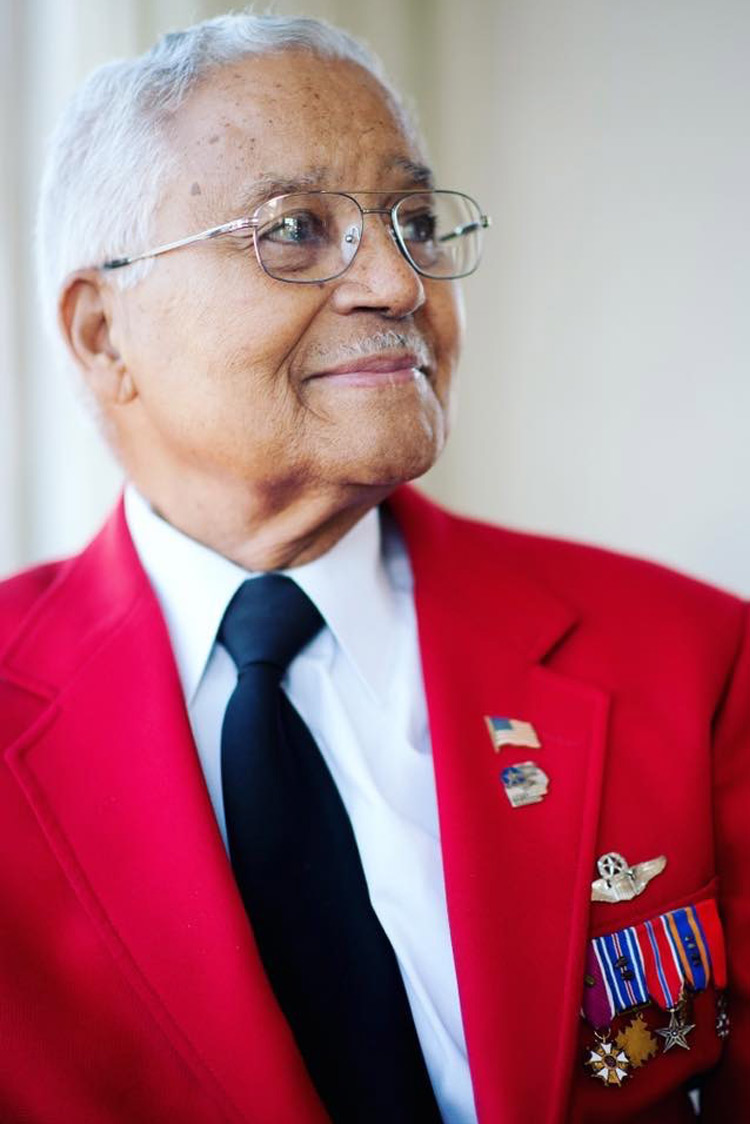 As a child growing up during the racial restrictions of segregation, Brigadier General Charles E. McGee never dreamed of a career in aviation. Yet destiny had other plans for his life, and after piloting his first plane, McGee became determined to not let racism stop him, but instead he focused on the four guiding pillars of his life — perceive, prepare, perform and persevere. With these ideals anchoring his path, McGee embarked on a thirty year career in the U.S. Air Force and is a proud member of the illustrious Tuskegee Airmen.

Born December 7, 1919, in Cleveland, Ohio, McGee spent his formative years moving from one state to another. While in Illinois, he graduated from South Side Chicago’s Dusable High School in 1938 and went on to attend the University of Illinois in 1939 where he used his earnings from his job at Civilian Conservation Corps to pay for school, studying engineering and then later life sciences. It was here that he became a member of the Reserve Officers’ Training Corps, ROTC and Pershing Rifles, a prestigious college organization dedicated to military drill.

McGee was only two years into his studies when he received his military draft card for World War II and on December 7, 1941 when Pearl Harbor was attacked, his call to serve the war’s efforts became imminent. After hearing about a newly-created program where black men were being trained to fly planes in Tuskegee, Alabama, he decided he wanted to serve his country as a pilot and began the application process. Six months later, he was in preparation to become an Army Air Corps aviation cadet and a month later, he arrived at Tuskegee Army Airfield. Despite the overt racism of the segregated South, on June 30, 1943, McGee officially earned his pilot’s wings and graduated from Class 43-F as a 2nd Lieutenant.

For combat training, McGee and his fellow pilots went to Selfridge Army Airfield in Michigan and from there they were sent overseas for service. McGee was stationed at a base near Naples, Italy, where he joined the all-black 332nd Fighter Group. They patrolled the harbor and the coast, attacked targets on the ground, performed fighter sweeps, and when bombers went on dangerous missions, they protected them, which earned these “Red Tails” the respect of both their German counterparts and the white bomber crews they protected. McGee is even credited with bringing down a Focke Wulf 190, a German fighter aircraft.

Upon returning to the states as a Captain, McGee became an instructor pilot where he taught all black bomber pilots, navigators and bombardiers. Staying focused on his beliefs – perceive, prepare, perform and persevere – led to McGee flying over 6,300 hours and during three different wars – WWII, Korean War and Vietnam War – he flew 409 aerial fighter combat missions. By the time McGee retired from the Air Force on January 31, 1973, he had been promoted to colonel.

Determined to complete what he started, McGee returned to school in 1978 and graduated from Columbia College with his bachelor’s degree in business administration. He found success in the civilian world, which included him being manager of the Kansas City, Missouri, downtown airport. McGee served as national president of the Tuskegee Airmen Association from 1983 to 1985, and he was a charter board member when Tuskegee Airmen, Inc., was established. McGee is also a member of Alpha Phi Alpha Fraternity, Inc.

McGee has received the Distinguished Eagle Scout Award; the Congressional Gold Medal (as a Tuskegee Airman); and he was inducted into the National Aviation Hall of Fame in Dayton, Ohio. When the George Lucus’ Image Awards winning Red Tails was filmed, he served as a consultant. At Super Bowl LIV, he presented the coin for the coin flip and was a special guest at the 2020 State of the Union Address after receiving an honorary promotion from colonel to brigadier general.

Throughout Charles E. McGee’s extraordinary life, he always kept his family close to his heart and once named a P-51C Mustang “Kitten” for his beloved wife Frances Nelson to whom he was married for over fifty years. He enjoys spending time with his children, grandchildren and great-grandchildren. He still encourages the young and old alike to perceive, prepare, perform and persevere, and as a centenarian he continues to live by his motto “Do while you can.”