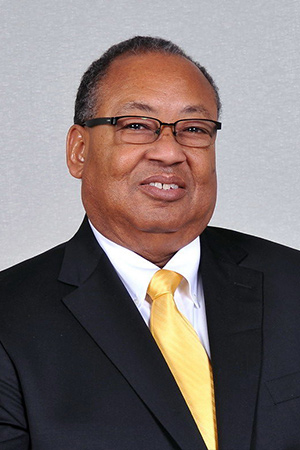 Chairman, NAACP Board of Directors

Mr. Russell retired in January 2012, after serving as the Director of the Office of Human Rights for Pinellas County Government, Clearwater, Florida since January 1977. In this position, Mr. Russell was responsible for implementing the county’s Affirmative Action and Human Rights Ordinances which provide for the development of a racially and sexually diverse workforce reflecting the general make up of the local civilian labor force and the implementation of the county’s Equal Employment opportunity Programs. Programs involved in the implementation of this ordinance cover employees in all the departments under the County Administrator and the five Constitutional Officers.

The Pinellas County Human Rights Ordinance provides protection from illegal discrimination in housing, employment and public accommodations for the county’s 923,000 residents. This ordinance has been deemed “substantially equivalent” to Title VIII of the 1968 Federal Fair Housing Act and Title VII of the 1964 Civil Rights Act. Over five hundred formal complaints of discrimination are filed under the ordinance annually.

In September 2007, Mr. Russell was elected President of the International Association of Official Human Rights Agencies (IAOHRA) during its annual meeting in Atlanta, Georgia. The IAOHRA Membership is agency based and consists of statutory human and civil rights agencies throughout the United States and Canada as well as representation from other nations. These agencies enforce state and local civil rights laws and are actively engaged in reducing and resolving intergroup tension and promoting intergroup relations. Mr. Russell concluded his second term as IAOHRA President at the conclusion of the IAOHRA Annual conference in Austin, Texas in September 2011.

Additionally, Mr. Russell served as the President of the Florida State Conference of Branches of the NAACP from January 1996 until January 2000, after serving for 15 years as the First Vice President. He has served as a member of the National Board of Directors of the NAACP since 1990. He has served the Board as the Assistant Secretary; Chair of the Convention Planning Committee; and Vice Chairman of the National Board.

Mr. Russell has served as a member of several organizations: International City Management Association; National Forum for Black Public Administrators; Board of Directors of the Children’s Campaign of Florida; Blueprint Commission on Juvenile Justice with responsibility for recommending reforms to improve the juvenile justice system in the state of Florida; past board member of the Pinellas Opportunity Council; and past President and board member of the National Association of Human Rights Workers.

Mr. Russell also served as the Chairman of Floridians Representing Equity and Equality (FREE). FREE was established as a statewide coalition to oppose the Florida Civil Rights Initiative, an anti-affirmative action proposal authored by Ward Connerly. Ultimately, the initiative failed to get on the Florida Ballot, because of the strong legal challenge spearheaded by FREE.