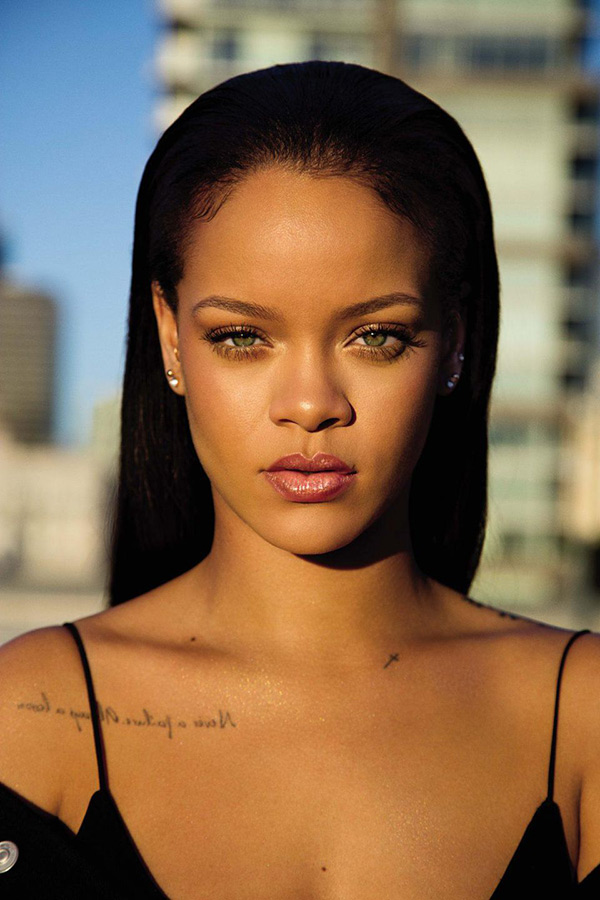 Within 10 years since the start of her musical career, Rihanna became the youngest solo artist to score 14 No. 1 singles on the Billboard Hot 100—the fastest to do so—she’s sold more than 54 million albums and 215 million tracks worldwide. Rihanna is the “Best Selling Digital Artist of All Time… with more than 100 million [RIAA] Gold & Platinum song certifications” and a nine-time Grammy Award winner who also counts 14 Billboard Music Awards among other countless music accolades. Aside from her incredible musical achievements and considerable impact in the music industry, Robyn Rihanna Fenty continues to add more credits to her burgeoning resume: executive producer, fashion designer, actress, business entrepreneur and philanthropist.

It all began with an impromptu performance for vacationing New York City music producers Evan Rogers and Carl Sturken in 2003 which helped jumpstart 15-year-old Rihanna’s multi-faceted career. Born in the Barbados parish of Saint Michael in 1988, Robyn Rihanna Fenty began honing her throaty, arresting vocals at an early age, influenced by such iconic talents as Madonna, Bob Marley, Janet Jackson and Mariah Carey. An impressed Rogers brought the newcomer to New York in search of a record deal. An audition for then CEO/ President JAY Z resulted in them signing her on the spot in 2005.

That same year, Def Jam released Rihanna’s dynamic debut album, Music of the Sun. Its popularity was propelled by the highly addictive dancehall-flavored lead single, “Pon de Replay.” A year later, Rihanna delivered the platinum-selling sophomore set, A Girl Like Me, featuring the No. 1 singles “SOS” and “Unfaithful.”

But it was 2007’s Good Girl Gone Bad that catapulted Rihanna into icon status. Leading the charge was the album’s first single, “Umbrella.” The track became the undisputed No. 1 pop song of the summer, dominating the U.S. pop, urban and crossover Billboard charts for 52 weeks in a row, and earning Rihanna her first Grammy Award in 2008 for Best Rap/Sung Collaboration. “Umbrella” was also the No. 1 single on the U.K. singles chart for 11 consecutive weeks and went on to win numerous awards.

That momentum carried over to Rihanna’s next album, the emotionally riveting Rated R. The 2009 set’s first single, “Russian Roulette,” notched chart history as Rihanna’s 12thBillboard Hot 100 hit—placing her second among female Hot 100 artists in the decade since 2000. From there, Rihanna released a new top-selling album each year. With 2010’s Loud, Rihanna became the youngest artist to achieve ten No. 1 singles when “S&M” reached No. 1 on the Billboard Hot 100. In 2011’s Talk That Talk spawned the global hit “We Found Love” which garnered her second MTV Video Music Award for Video of the Year and her sixth Grammy Award for Best Short Form Music Video. Rihanna embarked on the 777 tour in November 2012 where she performed in 7 countries in 7 days leading up to the release of her seventh studio album, Unapologetic. The latter album, in fact, was the singer’s first No. 1 debut on the Billboard 200. That same year found the singer making her acting debut in the theatrical film “Battleship.” Rihanna also voiced her first animated character, Tip, in the DreamWorks’ film “Home.” In addition to providing three singles to the film’s soundtrack, Rihanna curated the entire compilation.

In addition, Rihanna is an unstoppable force on the worldwide touring front, she is the first female solo artist to sell out ten concerts at London’s O2 arena. Her world tours, including the Diamonds World Tour that wrapped in November 2013, have taken the icon to more than 100 countries each time, selling out arenas and stadiums. Following this tour, Rihanna was honored with the first-ever Icon Award at the 2014 American Music Awards. Rihanna’s mother, Monica Braithwaite, presented her with the award in a heartwarming on-screen moment.

Rihanna’s creative muse has also triggered various entrepreneurial and philanthropic pursuits. Her innate sense of style—from cutting-edge hairstyles to immaculate fashion foresight—has earned her over 70 magazine covers. She was named the face of French fashion house Balmain’s spring/summer 2014 campaign and received the prestigious Fashion Icon Award from the 2014 Council of Fashion Designers. In addition to designing collections for Armani and British fashion brand River Island, Rihanna developed and executive-produced both the U.K. and U.S. versions of the television series “Styled to Rock.”

In August 2014 Rihanna premiered Rogue Man, her fifth scent—and first men’s cologne—in Rihanna’s successful fragrance line. Introduced in 2011, the line includes the female fragrances Reb’l Fleur, Rebelle, Nude and Rogue. At the end of 2014, Rihanna became PUMA’s global ambassador for Women’s Training and now serves as the Creative Director, bringing her styling sensibilities and innovation to PUMA’s collections. In March 2015, Dior announced that Rihanna will be the newest face of their brand starring in their upcoming Secret Gardens campaign. As of July 2015, Rihanna will also serve as Contributing Creative Director and Punk & Poet brand ambassador for Stance.

Rihanna made chart history with her album ANTI, released January 28, 2016, achieving her second consecutive #1 album with 166,000 in first week sales. ANTI’s lead single “Work” featuring Drake, which hit #1 on iTunes in 91 countries less than 36 hours after its release. “Work” has become Rihanna’s 27th Top 10 hit on Billboard’s Hot 100, tying her with Mariah Carey, Janet Jackson and Elton John for the fifth-most Top 10s in Hot 100 history.

In May 2016, Rihanna completed the North American leg of THE ANTI WORLD TOUR performing nearly 40 shows in places such as New York City, Los Angeles, Toronto, Chicago, Vancouver, Washington DC and more. In June 2016, Rihanna continued with a European leg of the ANTI tour with dates in London, Amsterdam, Berlin, Milan, Vienna and more. The Weeknd and Big Sean were featured as special guests on all European dates.

Rihanna is putting her influence to good use via additional philanthropic efforts. Chief among these is her own Clara Lionel Foundation. The Clara Lionel Foundation (CLF) was founded in 2012 by Rihanna in honor of her grandparents, Clara and Lionel Braithwaite. CLF supports and funds groundbreaking and effective education and emergency response programs around the world. With the voices of Rihanna and her fans, CLF also engages in global advocacy with the goal of improving the quality of life for young people everywhere. This past September, Rihanna hosted her fifth annual Diamond Ball to benefit her foundation.

Despite all of these distinguished achievements, Rihanna has not stopped there. In September 2017, she launched FEИTY Beauty. The first-ever global beauty launch in history, FEИTY Beauty by Rihanna premiered simultaneously online and in 1,620 stores in more than 17 countries. Rihanna leads the charge with her fearless reinvention, bringing to life a unique vision for beauty that is feminine and edgy, individual and inclusive, and always keeps makeup-wearers around the globe guessing. From packaging design to formula and shade development, she is intimately involved in every aspect of the brand’s creation.

In May 2018, Rihanna launched her lingerie collection, SAVAGE x FENTY. Inspired to create a line of intimates that complements a variety of shades and shapes, Savage X Fenty celebrates fearlessness, confidence, and inclusivity with sizes from 32A – 42H in bras, and XS-3X in undies and sleepwear.

In May 2019, Rihanna launched FEИTY and partnered with LVMH to create an original new luxury fashion brand. She debuted her first fashion collection for the FEИTY label in Paris that month. On December 2nd, FEИTY won the “Urban Luxe” Award at the British Fashion Awards held at Royal Albert Hall in London, just six months after the brand launch.